The Influence of Christian Teachings 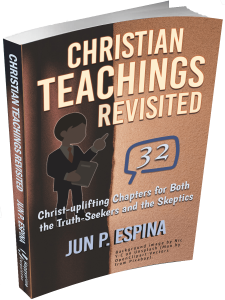 This book, Christian Teachings Revisited, addresses well-known yet essential subjects like the salvation of our souls and what will happen to the saved in Christ after the Millennium.

I don’t expect those non-religious and atheists around to have much interest in this paper, but I considered them in writing this book. Its subtitle, “32 Christ-Uplifting Chapters for Both the Truth-Seekers and the Skeptics,” reflects this commitment.

The skeptics and atheists are welcome to benefit from or attack (as they please!) this material. What is important is that this humble author wrote this work with both truth-seekers and atheists in his mind and heart. For Christ taught that “the Son of Man has come to seek and to save that which was lost.” (Luke 19:10)

I met a musician who experienced a rocky relationship with his wife, who demanded more financial support from him. Because he lived in an underdeveloped province with poorer municipalities, he gained popularity but faced fewer demands for his musical prowess.

It’s just like Beethoven among very poor people who couldn’t afford the price of classical music. This guy was a former cult member (he played music with his group regularly), but God touched him, and he got saved after I shared the gospel with him.

The Relevance of Biblical Christian Teachings

Biblical Christian teachings are just so true, relevant, and powerful that they could change even the lives of hardened sinners and skeptics. This paper intends to expound the Word of God to all anti-Christians.

For believers, this material starts with Christian teachings on immortality. I wrote in the first chapter:

“GOD GIVES US eternal life; He has reasoned that He will. ‘[B]ecause I live,’ taught Christ, ‘you will also live.’ Even the unbelievers have commented that if God exists, then man will have immortality based on His nature. ‘Since the Enlightenment,’ wrote William Lane Craig, ‘when he threw off the shackles of religion, man has tried to answer these questions [why, who am I?] without reference to God. But the answers that came back were not exhilarating, but dark and terrible. ‘You are the accidental by-product of nature, a result of matter plus time plus chance. There is no reason for your existence. All you face is death. Modern man thought that when he had gotten rid of God, he had freed himself from all that repressed and stifled him. Instead, he discovered that in killing God, he had also killed himself. For if there is no God, then man’s life becomes absurd.'” 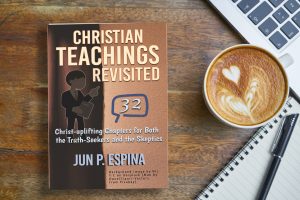 The Globalists—the Luciferians—aim to establish a one-world government and religion. I commented heavily on this matter in my book, The Biblical Blueprint to Keep the Family. These exceedingly powerful wicked families, who are now controlling the world, wanted to brainwash all people to believe black is white or white is black.

With this method, they could somehow wipe out the family institution and the Christian religion. What is the Globalists’ religion? The Internet says, “Luciferianism.” Since the devil is the father of lies, according to Jesus (John 8:44), they rammed the Evolution Theory down people’s throats as scientific when it is not.

Some people’s advocacy for Evolution is more religious than scientific. It is the religion of atheists. Using global mainstream media, the Globalists (the Illuminati) deceived the world with all kinds of deceit, from Evolution Theory down to climate change. Wokeism, socialism, LGBTQ, gender dysphoria, government control of the children, radical Islam is acceptable, Communism, Open Borders, divorce, abortion, and the U.S. Democrats—from all these, if you connect the dots, you will find the Globalists’ imprint!

This paper, Christian Teachings Revisited, aims to help shield the believers from “the flaming arrows of the evil one.” (Eph. 6:16)

This material touches on other topics, such as the spiritual stability of the born-again Christian and his assurance of salvation. We always emphasize the phrase “born-again Christians,” since not all Christians have the indwelling of Christ’s Spirit. (Rom. 8:9) Getting baptized permits the unbelievers to become members of the Bible-preaching church. They can easily obtain the “Christian” label. That is why Paul said:

Test yourselves to see if you are in the faith; examine yourselves! Or do you not recognize this about yourselves, that Jesus Christ is in you—unless indeed you fail the test? (2 Cor. 13:5)

Some Christians are spiritually insecure because they are not genuine believers. You will hear Christ from their mouths, while in their hearts they are doubting their own Christian teachings. In Chapter 15 of this paper (concerning spiritual stability!), I discussed:

What is spiritual stability? This query seems unimportant for the millions of unsaved people. They don’t have time for the God of the Bible—not till hunger, disease, or the mystery of death breaks through their lives!

Their obsession with the cares of this life deceives them into loving themselves more than God. Hence, they couldn’t see the things beyond the flesh walls of their beings. They could only see what beautiful creatures they were. They could only see their attractive eyes in the mirror but had no interest at all in who was behind their eyes’ magical powers to see and fall asleep. The less spiritual they are, the more passionately blind they can be to their Creator—to the Almighty Designer of their form and sinews—of their mysterious and only God-known nervous and digestive systems!

Without understanding the truths in the Scriptures, the unbelievers and rejecters of Christ fence their inborn urge to know more about the spiritual side of their nature. Unbelievers love to be lured and trapped religiously rather than to face the solemn truth that we are a part of God; that our souls belong to Him, and that we have full responsibility for our eternal future according to His sacred Word.
Dark is the deception course of the unsaved multitudes. It is like brainwashing oneself to be a non-male and fighting against God’s appointed gender. The silliest of all forms of homosexual self-deception is Caitlyn Jenner’s masculine courage to become a woman. Spiritual blindness always involves the fearlessness to reject the whole divine truth!

Those Saved in Christ Have Spiritual Stability

Born-again Christians, on the contrary, have spiritual stability. I wrote on page 175 of the book concerning the sketch of the life of the spiritually unstable:

Spiritual instability, thus, is one’s failure to hear “these words of mine, and acts upon them” — since you can find spiritual nourishment, stability, and steadfastness in Christ. He is surely the only Source of man’s spiritual strength and power!

The bottom line to living a stable life spiritually is to trust Jesus and give our all to Him.

In my upcoming writings, I want to examine more subjects covered in the book Christian Teachings Revisited.

Read Also: How Did I Gather Courage to Move Forward?

I want these three eBooks to be given away for a limited FREE DOWNLOAD before their publication. The book, “14 TIPS TO PROMOTE LOVE & FAMILY HARMONY: Family Focus Made Simple” will be released first.